The road to the 2014 SWA High Level Meeting

The third SWA High Level Meeting (HLM) will be held on Friday 11 April 2014. Convened by UNICEF, on behalf of the SWA Partnership, it will be hosted by the World Bank. There is a great deal of opportunity, as well as work to be done, in the lead-up in order to generate political attention, press for greater action and accountability in the delivery of commitments.

The 2012 High Level Meeting was unprecedented in attracting over 50 ministers and high-level participants. It demonstrated the increase in political prioritization of WASH that SWA seeks to achieve. The annual Progress Update of the 2012 SWA HLM commitments, released in August this year, shows that significant gains have already been achieved, such as increased budgets, strengthened national planning and country-level dialogue among ministers, technical stakeholders, civil society, donors and development banks. You can read more about the 2013 Progress Update on the back page. 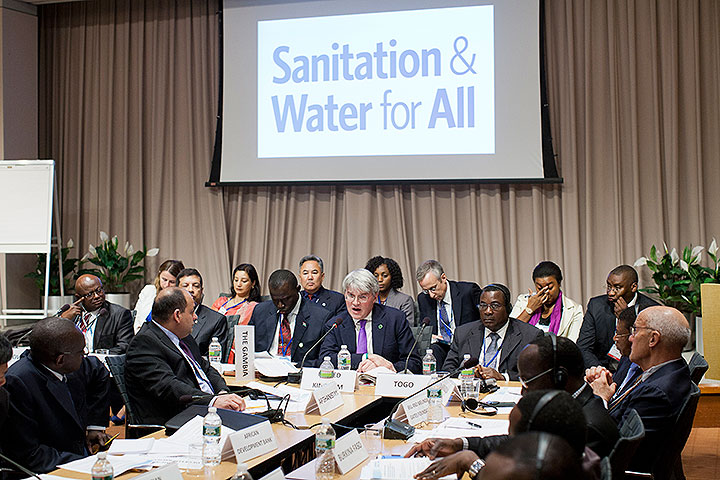 In order to build momentum, SWA is moving towards an on-going political dialogue in which the HLM represents a notable milestone, rather than a process dominated by a one-day biennial event. The High Level Commitments Dialogue (HLCD) encompasses both the preparatory process that countries and donors carry out to develop context-specific commitments which are tabled at SWA High-Level Meetings, and the annual monitoring of commitments made.

Partners are encouraged to raise the profile of WASH on the political agenda and promote solutions in order to strengthen mutual accountability and increase the impact of resources.

Partner action in the lead up to the 2014 HLM

By now, partners in country should have come together to develop a strategy and action plan to reach the HLM.

• Finalize 2014 report back on progress on the 2012 HLM commitments

Visit the partner workspace to read guidance on the HLCD and find out more about the key steps on the road to the 2014 SWA High Level Meeting.