Peru: Closing sanitation gaps with evidence-based investments in the sector

Sanitation and Water for All

On 28th July, Peru celebrated the 198th anniversary of its Independence Day. The President of the Republic, Martín Vizcarra Cornejo announced that the Government remains committed to facilitating access to water and sanitation for more Peruvians. In the presidential address, he underlined that “as of July 2019, the Ministry of Housing, Construction and Sanitation has invested and transferred S/ 3749 million for the implementation of 1610 water and sanitation projects at the national level, and that more than 1 million 180 thousand Peruvians from urban and rural areas will benefit from them, thus reducing the gap at the national level by 3.68 %.”

As of 2018, about 3 million Peruvians do not have public water supply and 7.4 million lack sanitary sewerage. “In order to close gaps and, as a consequence, achieve universal and sustainable coverage of sanitation services, Peru must strengthen providers and develop mechanisms that guarantee efficient investments related to the quality and sustainability of the management of service providers,” stated Ministry of Housing, Construction and Sanitation (Ministerio de Vivienda Construcción y Saneamiento/ MVCS) in the country brief submitted to Sanitation and Water for All (SWA) during the preparatory process for 2019 Sector Ministers’ Meeting. 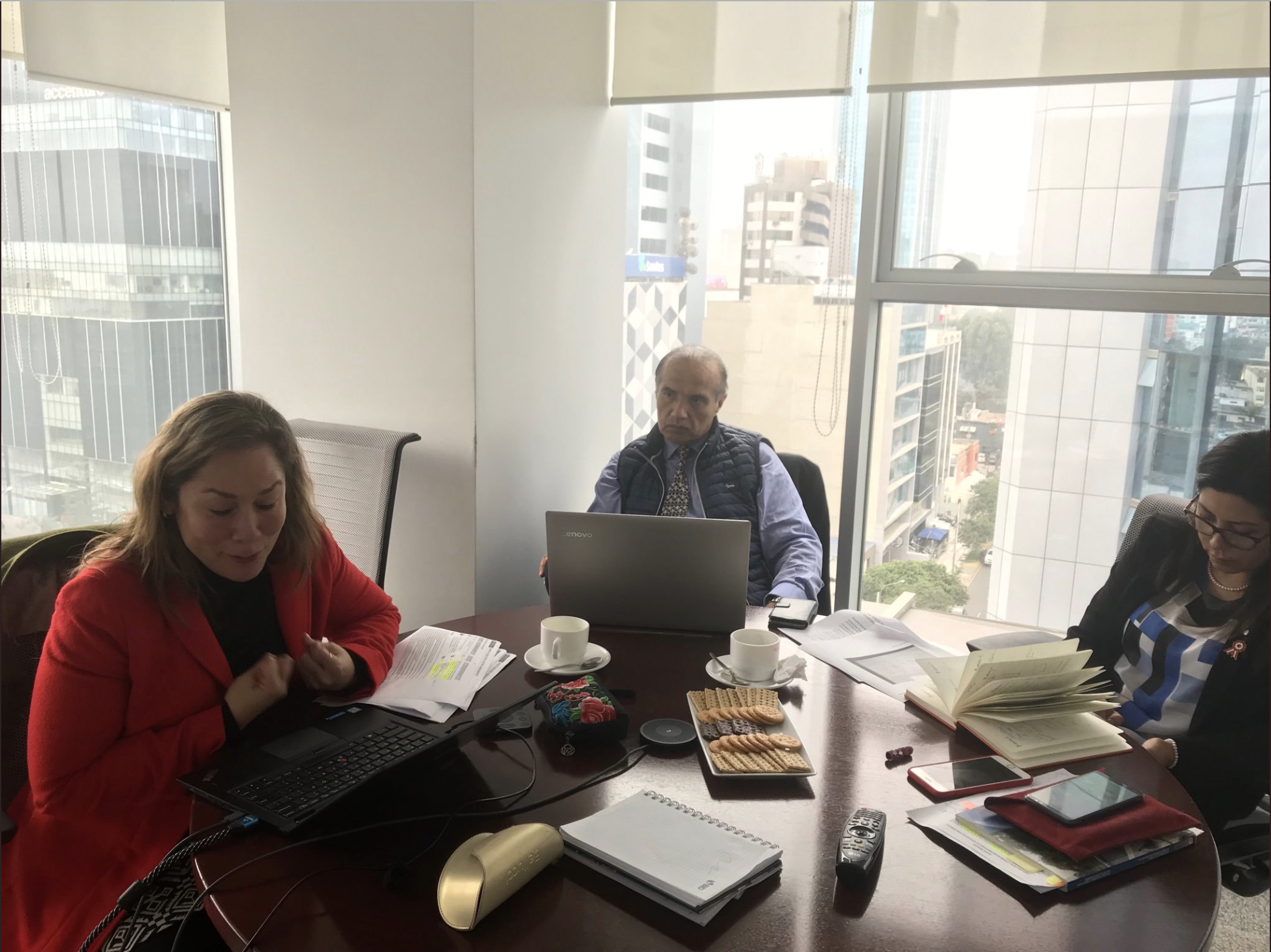 Mabel Morillo, Director of Sanitation, MVCS, Mr. Francisco Dumler, Chairman of the Board of Water Utility of Lima during the SWA webinar

In an intervention during the recently concluded SWA webinar on financing inequalities in Spanish, Mabel Morillo, Director of Sanitation, MVCS highlighted some of the following best practices that would help them close the gaps in the sanitation sector:

2) Legal framework in the Sanitation Sector: In 2016, MVCS launched the Law Decree 1280 for the Sanitation Modernization Sector Plan for the urban and rural areas. This plan includes specific sanitation policy measures for hardware (e.g., toilets, sewage treatments, etc.) and software (e.g., behaviour change promotion and community resource management) components of the water, sanitation and hygiene (WASH) intervention cycle in order to improve the service capacity of the providers (both urban and rural) as well as improve the better allocation of the budget. The WASH regulator, the National Water and Sanitation Regulator (Superintendencia Nacional de Servicios de Saneamiento/SUNASS) looks at the supervision and inspection of the rural areas. More specific norms are being created to clarify the roles and competencies of the WASH actors. MVCS is also working on a new subsidy policy to address the most vulnerable populations and improve providers’ capacities.

3) Evidence-based Decision making: Diagnostic System for Rural Sanitation (Sistema de Diagnóstico del Saneamiento Rural en el Perú/ DATASS) is the national information application that registers, processes and provides detailed data on sanitation services in rural population centers. This can be consulted by the entities of the 3 levels of government (Central, Regional and Municipal) and the general public, providing relevant information for decision-making in investments and the strengthening of rural sanitation services. 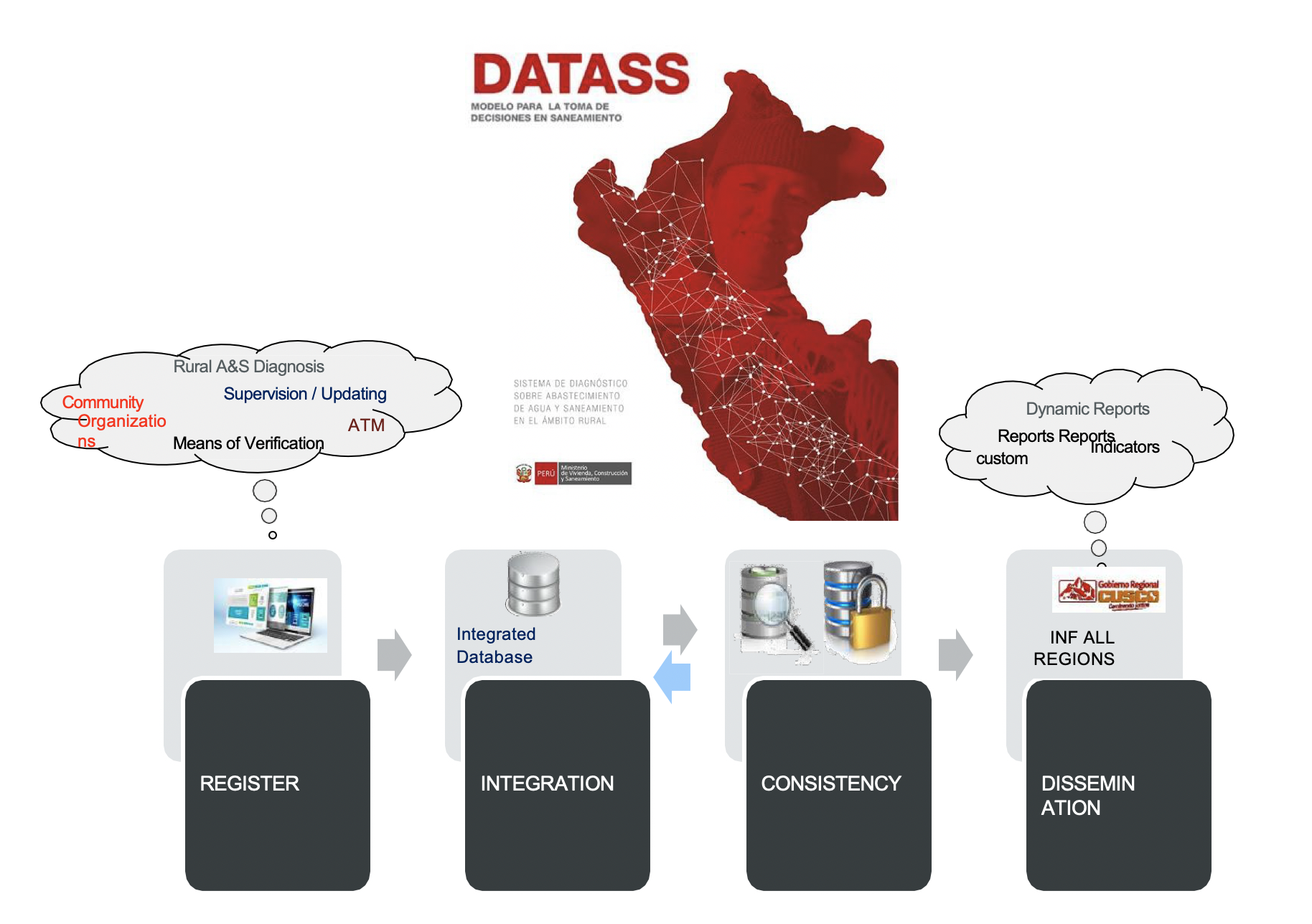 4) Provider Strengthening: Based on the Law Decree 1280, for modernization of the sector, one of the biggest priorities is to strengthen the WASH providers. In urban areas, all the Water Utilities are public and most of them are undergoing WASH reforms to improve the services. The WASH utilities are supported by Technical Agency of the Sanitation Services Administration (Organismo Técnico de la Administración de los Servicios de Saneamiento/OTASS). In the rural areas, the Rural National WASH Program (PNSR), with coordination of the subnational governments, supports WASH Municipal areas (1458 municipalities) to form Rural WASH Committees Board (Juntas Administradoras de Servicio y Saneamiento/JASS). In Peru, around 30,000 JASS manage the rural wash services.

5) Investment Planning:Currently, 24 completed and approved Regional Sanitation Plans (PRS) will allow prioritization and planning of sector investments. The Strategy for the implementation of the PRS:
a) Technical assistance: programmed with the GoRe (Executive Branch and Regional Governor Meetings)- for the updating, verification and follow-up of the investments in the PRS that have a direct impact on the closing of gaps.
b) The MVCS through the Directorate of Sanitation of the General Directorate of Policies and Regulation in Construction and Sanitation executes this technical assistance.

To strengthen sector collaboration in Peru, SWA regional coordinator for Latin America and Caribbean, Cesarina Quintana said, “Peru is the SWA member since 2017 and the efforts (through strategies and policies) of the government are aligned with Leave No One Behind and the intersectoral approach (such as collaboration with Health, Development and Social Inclusion and Finance Ministries). SWA is supporting the national government and the country to consolidate the multi-stakeholder platform, which includes an active participation of the Civil Society, Academia and Private Sector in order specify their commitments for closing WASH gaps.”