On 28 May the world celebrates Menstrual Hygiene Day. It’s an opportunity to talk about the importance for women and girls to hygienically manage their menstruation – in privacy, safety and with dignity – wherever they are.

Globally, approximately 52% of the female population (26% of the total population) is of reproductive age. Most of these women and girls will menstruate each month between two and seven days. Menstruation is an integral and normal part of human life (of human existence!). Menstrual hygiene is fundamental to the dignity and wellbeing of women and girls. It is an important part of the basic hygiene, sanitation and reproductive health services to which every woman and girl has a right.

Menstruation is a big taboo, stronger even than the taboo on defecation. In almost every culture there is shame, disgust and stigma attached to menstruation. According to UNICEF, one in ten girls in Africa skip school during menstruation.

“Girls in a school I visited in Dakar, Senegal, explained to me how they had to leave school for 5 days when they started their monthly period. In Tuvalu, a Pacific Small Island State, a mother explained to me that either she had the money to buy her daughter sanitary napkins or pay the school bus for her to attend school – which meant she would not attend school 5 days a month. These and other stories are clear evidences that lack of adequate menstrual hygiene management can and does violate the human right to education” reports Catarina de Albuquerque, Executive Chair of SWA.

When poorly managed, menstrual hygiene also has an impact on health. For instance, 70% of all reproductive diseases in India are caused by poor menstrual hygiene – it can also affect maternal mortality. In urban India, 43%-88% of girls use reusable cloths during menstruation, yet these are often washed without soap or clean water.

Moreover, in many cultures women and girls are considered “impure” during their menstruation, and are subsequently separated from others in many spheres of normal, daily life. For instance, the practice of Chapaudi, a tradition in West Nepal that has been forbidden by the Supreme Court of Nepal in 2015, has strong consequences in the lives of women and girls during their menstruations. They can’t touch other persons, cattle, green vegetables and plants, or fruits. They can’t get inside houses, temples or kitchens. They can’t use public drinking water. These practices are clear cases of discrimination against women and violations of the Convention on the Elimination of All forms of Discrimination against Women.

Menstruation is not only a matter of hygiene, it is also an issue of Human Rights that affects every day 800 millions of women and girls all around the world. 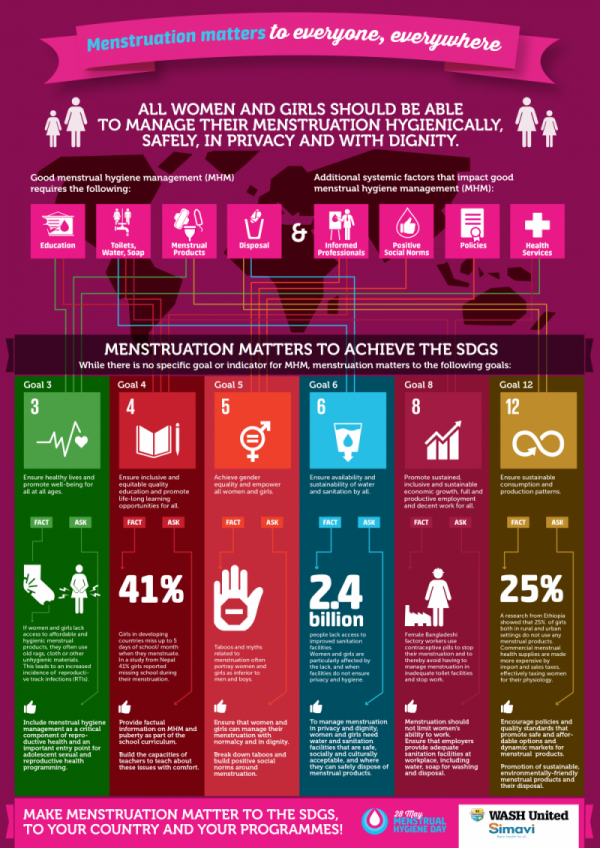