Sanitation and Water for All Secretariat

In 2017, Indonesia joined SWA and is now on a steady path of providing universal sanitation access in the country.

The strategy for achieving universal access is to expand the sanitation service coverage based on the need. For instance, basic sanitation access for 15% of the households that are in areas with low sanitation risk and low density. On the other hand, improved sanitation access for the remaining 85% of the households that are covered by both on-site and off-site treatment system, with the underlying target of become 100% Open Defecation Free (ODF). Thinking beyond toilets, solid waste management is a crucial component of sanitation development in Indonesia, especially in urban areas. By 2019, the target is to reduce solid waste generation by 20% and to collect and treat 80% of solid wastes at the final processing site.

Indonesia has identified four main challenges in its path towards universal access: 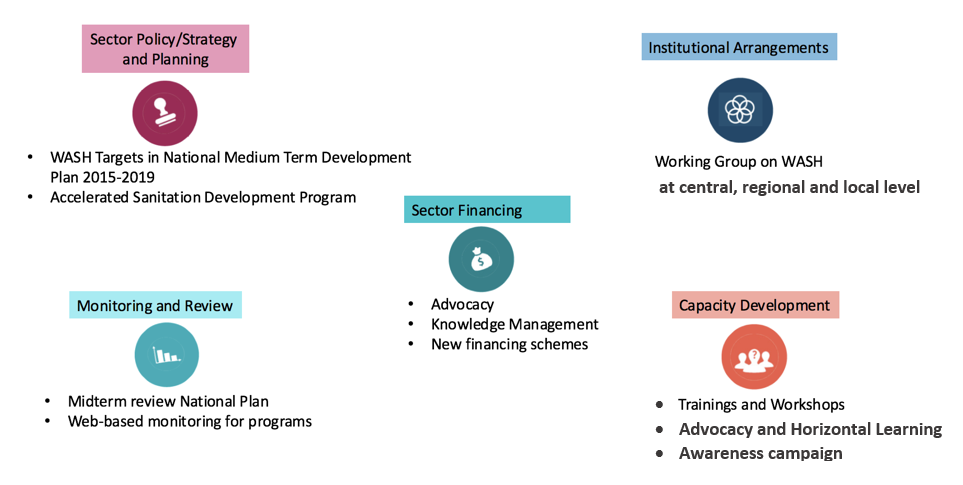 Despite the progress, the country still faces many challenges in achieving the expected acceleration towards its goal of universal sanitation access. Therefore, over the coming years, Indonesia will continue to intensify the multi-pronged approach, by creating a comprehensive database of sanitation, improving advocacy to and building capacity of the local governments, strengthening knowledge management through national WASH conferences, capturing lessons from city sanitation summits of AKKOPSI, and retaining momentum with innovative schemes of financing.